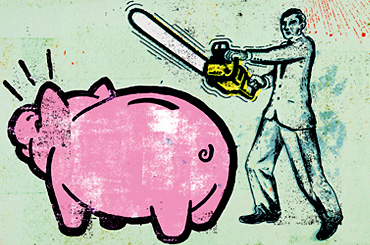 The big Wall Street banking and investment firms—the same fine people who brought us the subprime credit meltdown and the mortgage crisis—are now lobbying lawmakers to allow them to buy up and manage your pension fund money.

According to a recent Business Week report, roughly $500 billion—that’s half a trillion dollars—is currently sitting in so-called “frozen” pension plans. These are corporate pension plans that are closed to new members. Because corporations are cutting pension plans, new pension funds become frozen every day, and the trend is expected to continue. Among well-known companies with frozen plans are Alcoa, HP, Verizon, and IBM.

Currently, many of these plans are underfunded due to many reasons, such as fluctuations in the stock market. When this happens, the corporations can be forced to make up the shortfall. Thus, it’s no surprise that many companies would love to get rid of the pension plans even though they’re full of valuable assets.

And it’s no surprise that big Wall Street firms would love to take them over. They could charge their typical fees of 1% to 2% annually to manage them. That equates to billions of dollars of your hard-earned cash that would be gobbled up.

But the danger isn’t limited to a few percent points per year. As Business Week further reports, if the moneymen get the way, some 44 million future retirees’ money could be put at risk:

“We think this is just a terrible idea,” says Karen Friedman, policy director for the advocacy group Pension Rights Center. “In the wake of the subprime crisis, it would be crazy to allow financial institutions to manage these plans.”

Historically, pension portfolios have been managed in a conservative fashion, investing mainly in stocks and bonds. Alternative investments such as hedge funds, derivatives, and asset-backed securities typically represent less than 25% of pension assets. If financial firms get in, the fees they collect would present a financial incentive to boost assets under management. One way to do that would be to move pension plans into riskier investments. Even worse, critics say, Wall Street firms could use pension portfolios as a dumping ground for ailing investments on their own books. They point to the auction-rate securities market, where, regulators allege, some Wall Street firms pushed stockpiles of failing investments onto unsuspecting clients.

Call your elected representatives now… and tell them you don’t want them to let Wall Street sharpies get their hands on your pension assets!